By Nathan Barton
The METRO (the subway and bus/train system which serves the District of Columbia and nearby areas of Northern Virginia and Maryland) has a ban on political and religious advertising on its buses, trains, etc. It is commonly called the “Geller Ban” because Pamela Geller and her advertising was the original reason for the “outrage” which prompted the ban.

Here is one of the original ads banned – after all “Free Speech” is political, and the Prophet of Islam is religious AND political:

The ban just hit part of the Roman Catholic Church. Here is the ad the Archdiocese of Washington wanted to run on the DC Metro: 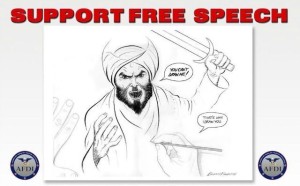 Apparently, based on a quick review on-line of pictures and policies, you CAN:

But because they are “religious” or “political” in nature, you cannot:

Oh, and although you can’t have “political ads,” you can have ads by DC lobbyists touting purchasing THIS military aircraft or that one, and you can have ads promoting FAKE candidates (like “Underwood 2016”) in TV series (House of Cards) – unless you are promoting the TV series “Man in a High Castle” and your advertisement consists of a flag with a swastika instead of 50 stars in the blue canton with the thirteen stripes. (‘Cause that is “promoting fascism” as though Underwood wasn’t.)

Federal court upheld this today, as reported by One Page News. The Catholics lose.

No free speech in DC, not on the trains and buses.

So it is NOT just Catholics lose. ALL of us lose.

Mama’s Note: “Free speech” is not the core problem here. This is just another example of everyone trying to control everyone else via government. The real solution would be private property in a free society. Whoever actually owned and operated the bus, train or whatever would be free to post, or not post, any sort of ad that appealed to them or whatever they believed their customers would want to see.

This kind of “free speech,” with everyone trying to impose their own ideas and power over others, can never be resolved to everyone’s satisfaction. Nobody should be able to force someone else to publish or post their “free speech,” any more than force others to do anything else.

I wonder if the people who ride those buses and trains have much, if any interest in  the ads or posters of any kind. They have their jobs, families and personal problems to occupy their thoughts, I’m sure. I trained myself long ago to ignore ads, anywhere. Especially political ads of any kind.

We are all harmed by the controllers. We all lose when people impose their ideas on others by force.