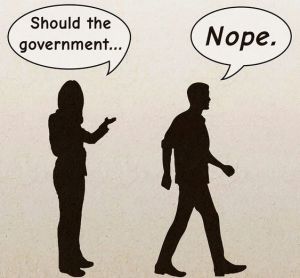 I found this great graphic on-line and get to share it.  No idea who did it, but many thanks. (If someone knows, please let me know so I can give proper credit.)

The guy’s answer of “Nope” is the right one for 99.99% of the questions that the majority of people in the Fifty States will pose.

I can 0nly think of two possible categories of questions that will have a “Yup” answer:

Anything else?  Pretty much, no.

Unfortunately, 99.99% (or more?) of the people of the Fifty States, and most of the First World and Second World, will be asking really bad questions.  Every one should be answered “Nope!” Loudly, and as often as necessary until it sinks in.

And here is the gotcha: ultimately backed up by force of arms, of free people defending themselves against the aggression of government and those people who seek to use government to control others.

How many people, even when they want to get government out of something near and dear to them (drugs, bedroom, church, business, roads, etc.), still want government to START doing something that has always been done by someone privately, or a volunteer group?

Let me talk about something near and dear to me.  Historic sites and properties. Today, we assume (with no legal, constitutional foundation) that it is the role, the duty, of government to preserve historical sites and properties.  That government, at some level, must own and maintain and interpret and protect these things.  Everything from battlefields and the monuments on them, to historic graves to old “historic” railroad stations and homes where famous people were born or lived, or structures in which famous events took place.  Or even sites which are “representative” of things which had historic significance.

I like historic properties, I like visiting historic sites.  I believe that preservation of historic sites, of important (and even beautiful) historic buildings and structures is important for us and for future generations, to help us remember and learn from our history.

For almost two centuries, the most historic site in the now-State of Texas has been the Alamo. Until less than a decade ago, that site was owned, preserved, and made available to the public to visit, as a shrine of Texas freedom, by a private organization (although open to public membership).  It was protected well. Virtually the only responsibility, duty, of that organization, was to care for and make this site available. But politics intervened, and now it is owned and operated by government. It now competes with all the other responsibilities and properties of Texas State Government.

There are and have been many other examples of such.  Recent history has shown that  government fails at protecting historic sites. (As it fails at everything else, except treating people badly and awarding incompetence and privilege and power.)

Just one example of where the answer to “Should government…” is NO. Not if we really care.