What does government cost us?

Got this in the email today. 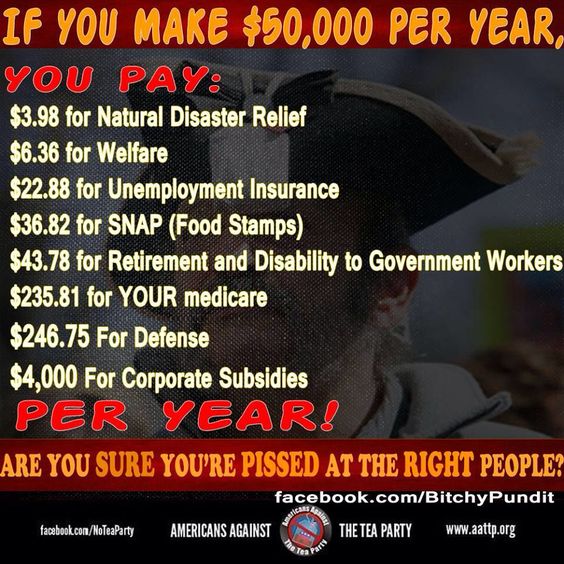 Is this right?  Read on.

Don’t know who wrote it, don’t know if their numbers are accurate or not.  (A correspondent forwarded it to me without attribution, one of those “wha dya think?” forwards.)  I suspect, based on the corporate subsidies item,

The corporate subsidies is hard to define, of course. Many of us believe that virtually EVERY part of the Fed (and State and Local) spending is “corporate welfare.”  Especially DoD – $500 toilet seats and hammers, all those jobs in Seattle and LA and Detroit for defense contractors, and the like.  Ditto for education funding (textbook publishers, dairy companies, construction contractors), highway and airport funding (construction contractors and aircraft and auto manufacturers), and of course Food Stamps (SNAP) (farmers, food manufacturers, grocery stores, etc.). (By the way, isn’t SNAP welfare? for individuals or families as well as corporations?)

Let us assume this is true. This $4,700 is just a small part of what the FedGov spends: that isn’t even 10% of $50,000 a year.  This doesn’t include thousands of things that government spends OUR money on.  Especially not things like interest on the national debt.  With all the spending (which is, as we all know, much higher than taxes), the FedGov is collecting (on average) more than $10,000 per person (man, woman, and child) in the US.  And spending about $13,000 per person per year. So this chart shows less than half.

Interesting and depressing, I know.

But not the real story.

Money is important to almost all of us.  Not just all us Americans, but all us around the world.  (I know there are exceptions.) So it makes sense to discuss things in terms of money.

But where government, and especially the FedGov, REALLY costs us – you and me – the most and worse is intangible:

It costs us freedom.  It costs us liberty.  It costs us opportunity.  It not only steals money from us, but it steals a better standard of living, better technology, better futures.  Every day, every week, every year.  It costs us frustration and anger and time from family and friends.  Even for those who work for the governments, there are costs.  Much more than money.

It is not a right or left issue.  It should not be, at least.  The GOP spends and taxes just as much money, and costs us just as much of all these other things, as the Democrats do.  Ditto for Progressives (Regressives) and Conservatives – whether paleo or neo.

3 Responses to What does government cost us?