Whose side are we on?

The good Regressives (Tranzis) of Laguna Beach, California, seem to be working overtime to tick people off. By slamming their local cops. 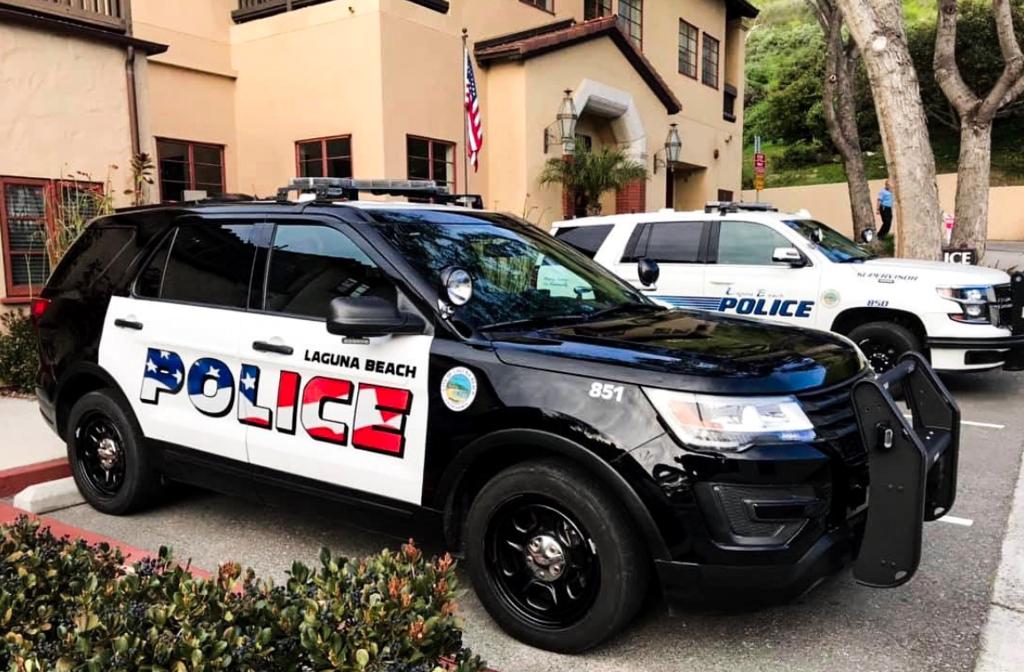 According to a posting at Godfather Politics, the “liberals” are slamming the police department in that city for the new red-white-and-blue, US flag based logo on their cop cars, stating that it is “very aggressive” and “didn’t really represent our community.” Not surprisingly, they are getting a lot of negative pushback, from conservatives and even some liberals.

It is also claimed that the logo is confusing. That some people think it is some federal agency, like ICE or the Border Patrol or the FBI.

Now, lovers of liberty are not exactly fans of police departments, nor of the way that police wrap the flag around themselves and proclaim their patriotism. Especially while failing to honor their oaths (or promises) to uphold the Constitution.  We understand that many people fear the police, for many good reasons.  And we understand, more than most, that local police often function as arms of the FedGov and the State (California, in this case) instead of truly being local.

But in this case, the cops are getting a bad rap.

Last time I checked, Laguna Beach, and the entire State of California, is still one of the Fifty States. Using the national flag is certainly neither a poor representation of their community nor an aggressive move on their part.  No more than wearing a US flag on their shoulders, nor having a small US flag sticker on their cruisers.  Or flying one in front of their police stations.

This is, of course, fully in keeping with many Tranzi, regressive efforts in recent years, aided by racist Hispanic “Mexican-American” organizations like La Raza. There have been confrontations in public schools about merely flying US flags, and claims of bigotry in just displaying the flag – not that dissimilar to what similar groups have done in the South. Students have been ordered to hide the flag if shown on a tee-shirt or jacket. (Along with much else, admittedly, which is considered to be non-inclusive or offensive.)

But this reaction points out the “liberal” preoccupation with appearances and feelings.  Never mind if the cops are abusive, never mind if people fear getting shot or injured by cops, are hassled by cops for the wrong reasons, or fail to keep the peace.  All that matters is that their cruisers are more menacing because of the colors of the logo!

Logically (not that the Digressives ever show much logic), it appears that the cops can be abusive monsters, as long as they avoid triggering bad feelings by their vehicle’s markings.  I suppose that as long as their steel gauntlets are properly covered by velvet, the bruises won’t hurt as much.  Maybe they can do the same with their bullets?

This preoccupation with appearances is common on the part of the “liberals.” Not just in California, but across the Fifty States. Libertarians need to pay careful attention to such matters. At the same time, we need to point out the facts: police do not necessarily serve the cause of liberty and public safety.  Regardless of how they decorate themselves and their vehicles, it is their actions that demonstrate whether or not they are good for a community.

And far too many times, the police are not protecting and serving their communities well. Rather, they are the servants of the powers that be and the nanny state, treating the people that they supposedly work for (and pay their salaries) as if we were all convicted criminals.

Oddly enough, none of the complaints point out that one intended purpose of the red, white, and blue logo is to take advantage of people’s patriotism and get them to support the police more.  And ignore the improper and even deadly actions of the police, in their service of the powers that be.

Let us work, not on externalities like appearance, but on the real issues. Liberty and the growing power of the police state.