South Dakota: we were all bad here, I guess? Wuhan flu update!

Nationwide, the rate of growth in hospitalizations in the Fifty States overall actually slowed after Thanksgiving, despite all the fears. South Dakota, however, has been singled out by the media (including local press) and Democrat politicians and partisans, for our spiraling disease rate and death rate. And refusing to lockdown, mask-up, and race into the streets to demand vaccinations and money.

It all sounds pretty horrible, doesn’t it?

But here’s the problem, as a friend (Tom Woods) was sharing with me and others:

More than half of the [nationwide] hospitalization increase after Thanksgiving occurred in California and New York! Didn’t those jokers hear that the way to avoid this is by lockdowns and masks? Sheesh! 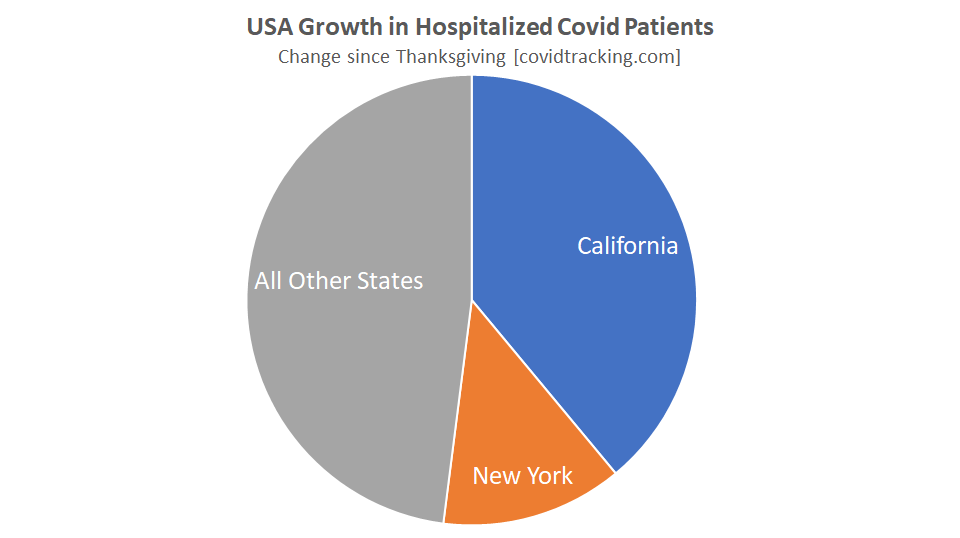 Oh, and here are North and South Dakota. North Dakota imposed a bunch of occupancy restrictions to “stop the spread.” South Dakota didn’t. South Dakota has an eeevvilll governor who hates people, don’t ya know?

Gee, isn’t that funny — their numbers look exactly the same: 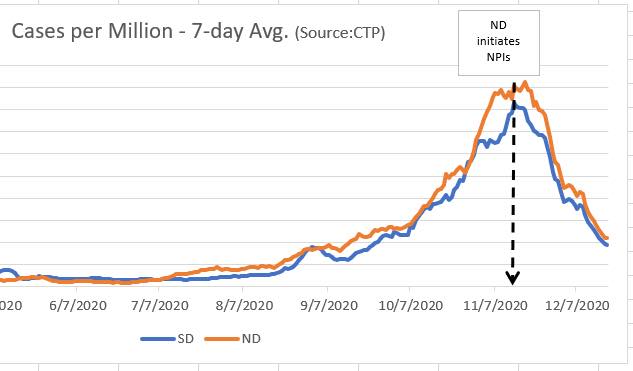 I think I’ve made my point. Or so Tom says. I think he did, too.

For one thing, people aren’t listening.  Too many have been brainwashed into wearing their face diapers, rubbing elbows (after sneeing into them, natch!),

I was accosted in Safeway today – staying six feet apart from everyone (except Debby), and wearing my WASTELINE ACU jacket – and carrying, not wearing, my mask.

Not wanting to get into a big discussion, I simply said (from a good good eight or ten feet away by then) “Sir, mind your own business.”  His eyes bulged and he started cussing.

I walked away.  I know that in other places, people have been attacked for not wearing masks, and have no desire to be such a target.  But even here in SD we have these nannies. So incensed by someone NOT showing their subjection to the powers-that-be (even when the powers-that-be have NOT mandated things) that they clearly don’t care about “the science” as they go out of their way to attack.

You see, Rapid City, like the State of South Dakota and Pennington County, is still sorta a free place. It doesn’t mandate masks. Or social distancing, or washing your hands 40 times a day. Or locking yourself up in your basement.

The Rapid City Common Council (they don’t like that name any more, I’ve found, they are now the CITY Council) has been arguing over a mask mandate, which we have NOT had.  The president of the council (too good to just be a “chairwoman” or “chair,” I guess) has been a very loud (and obnoxious) proponent of mandating masks everywhere, and has now been asked by a group of people to resign, she’s gotten so bad at speaking down to witnesses and other council members and staff. And demanding that everyone “follow the science.”

But in a picture taken outside City Hall a few days ago, there she stands with the rest of the council, shoulder-to-shoulder, and not a single mask among them.  Not even the couple of very hardcore Democrats on council were wearing them. Not even this “president.” Hmmm…

I’m an engineer, and I follow the science. AND the engineering. The REAL science, and of course, the REAL engineering. There is no “I wish” in either. I can wish I want for concrete with a 3-day cure time and a strength of 100,000 psi, and I ain’t gonna get it. I can wish for a major, Scotty transporter to send my gravel to customer. And I still have to use 23-ton-capacity ten-wheelers.

I can’t ignore the data from around the world. Face diapers DO NOT prevent getting COVID or any other flu. Massive numbers of children and young adults are NOT dying like flies. And doctors and politicians who say or imply otherwise to terrorize us are NOT our friends – and don’t care about Aunt Sadie or Gramma Jo.

Afterword: THANKS to Tom for sharing that. And thanks to a number of other libertarian writers and pundits, including Tom Knapp and Eric Peters, for promoting sanity and reason on the Pandemic and Politics 2020!

1 Response to South Dakota: we were all bad here, I guess? Wuhan flu update!