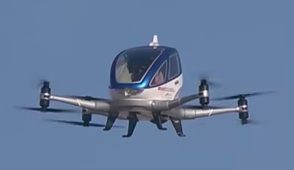 Ahlan, a Dubai English-language webzine and newspaper, reported testing in Dubai of an 800-pound, passenger-carrying 4-rotor drone taxi this week.

As I told Mama Liberty, just picture a bunch of these flying over the Black Hills!

A nice dream, but…

Not as long as we have the FedGov, and not as long as we have the Federal Aviation Administration (FAA).  They are the tyrants of the airways, and the powers-that-be will NOT allow something like this to operate without years of “experiments” and testing and review and probably multiple acts of Congress.  Especially for a self-piloting drone, with (at best) a “pilot” on the ground.

And that will cost so much and take so much time that only the 1% will be able to enjoy a short taxi-commute or swing over (near) Mount Rushmore or the buffalo herds of Custer State Park, or watching climbers on Devil’s Tower.

You don’t think so?  Consider other news this week: At Fox Business the headline reads “Congressional Panel Approves Bill to Boost Testing Self-Driving Cars.”  The story tells the truth: not “boosting” but restricting testing (and therefore) use.  “A top priority for lawmakers and the automotive industry is to limit states on regulations. ”  The FedGov, once again, is stealing power away from the states (if indeed the states themselves have ANY legitimate authority to regulate self-driving cars) to keep the power centralized in DC.  In fact, the legislation now in Congress purports to override existing state laws and experiments and use of self-driving vehicles in Nevada, California, Colorado, and elsewhere.

It is nothing less than yet another power grab by DC and the scumbags who dwell there – physically or mentally. Xconomy has the right of it: the feds want to nullify state autonomous driving laws.  And every other kind of law that doesn’t give more power to DC.

The effect will be the same as we see on a daily basis with the FDA and dozens of other alphabet agencies; delays upon delays in deploying new technology, costs piled on costs for permitting and testing and lobbying and bribes and insurance and everything else you can imagine and, probably, deaths and maiming and injuries for those private people and citizens and customers.  Stagnation.

Indeed, government regulation and stupidity is one big reason (if not the major reason) that we haven’t had flying cars (and cabs and cargo vehicles) since the 1970s or so.  And the reason we are still burning coal and natural gas and even gasoline and Diesel (instead of safe and dependable thorium reactors).  The same reason we are pumping oil out of the ground instead of making it through pyrolysis and algae farming, and a half-dozen other ways. Government does NOT want innovation – even IF that technological innovation is under government control.

If someone had seriously predicted the Internet in advance, it would have never been allowed by government (except maybe for strictly internal-government use, if then). Government would have legislated it out of existence – aborted it in the womb.  For the same reasons that the Soviet Union and Fascist Italy and National Socialist Germany and Communist China outlawed so much for so long.  If not as craftily as the modern EU and FedGov and UK do.

And if they can’t outright ban it, they can tax it and regulate it so much that the technology is limited to the very powerful, influential, and wealthy.  Remember the Concorde?  Remember when long-distance telephone calls in the US cost 25 cents a minute?  And what did you pay the FedGov and state governments (and even local governments) last year for the “privilege” of driving your car?  Excise tax, sales taxes, inspection fee, license fee, drivers license fee, registration fee, insurance premiums (the taxes thereon), fuel excise taxes, taxes on mechanic’s services, additional taxes on tires and other rubber products.  The list is incredible and one of the major effects is that there are fewer drivers and fewer vehicles on the road.

Is that a good or bad thing? You decide for yourself.  But show where, in the FedGov constitution or state constitutions – let alone in the “laws of nature and nature’s God” – that decision should be made by elected politicians (I’d say “corrupt” politicians, but that is probably redundant) and unelected bureaucrats?

What I do know is that our lives would be far better off, materially AND spiritually, if we didn’t have that collection of dead albatrosses dangling around our necks.

Mama’s Note: They really ought to be dangling from assorted trees and lamp posts…

2 Responses to The price of lost liberty – aviation liberty