By now, I’m sure everyone has heard that Illustrious Leader of the Democratic People’s Republic of Korea has successfully launched their latest and greatest ICBM.  As reported in Zero Hedge, the Hwasong-15 apparently does have the range to be fired from North Korea to hit targets in all parts of the Fifty States.  Zero Hedge republished this map from the Hawai’i Emergency Management agency, showing what is now possible.

As a result, Hawai’i is again setting up its air/missile raid siren warning system, long left to rust away, since not even Russians or Chinese are so crude and barbaric as to drop a nuke on Honolulu, or even Pearl Harbor or the Big Island.  But the DPRK is far more savage, as demonstrated by their Illustrious Leader’s haircut and the big Stalinist-style dress caps their officer corps wears.

It gives a whole new meaning to the phrase “Flyover Country,” doesn’t it?  Everyone figures that the logical American targets are pretty obvious:

The Big Seven pretty much means that even the cowboys and oil barons of Texas, much less the fleshpots of Las Vegas and Spring Break Florida, aren’t really worthy targets.  But it sure flies over all us piddling poor states like South Dakota, Wyoming, Colorado and even Utah.

Except that it really doesn’t.  ICBMs have to follow the Great Circle routes as they leave the atmosphere and then re-enter in a blaze of glory.  That last map is one of those lying airline type maps, and does NOT show the way the missile (or transcontinental airlines) fly.  This next one shows the real route of Illustrious Leader’s Yankee-killing “super-heavy” warhead. 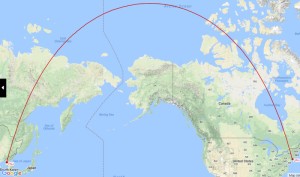 Wow, guess we Westerners and those in the Great Plains really are not actually Flyover Country, at least not for Pyongyang.  It is Canada which gets to enjoy that status. Pretty neat, huh?  Unless, of course, you are Canadian.  And, given the current anti-ballistic-missile defense, happen to be right under the most likely kill zone for a Patriot or something else to take out that North Korean warhead.

With all the potential for fallout and electromagnetic pulse (EMP) if the warhead actually detonates early.  And maybe as much potential (or more!) for fallout if the ABM just pulverizes the warhead.  A kinetic kill still leaves all that lovely plutonium or uranium intact and the dust could scatter over thousands and thousands of square miles. Of course, dispersed like that, the impact would be far, far less than the fun effects of an EMP in low earth orbit. (Although the panic would be, well, astronomical: the fear of ‘Merican (and Canadian) people of radiation has been honed to a sharp edge of terror for 70 years.)

First, we could withdraw all our troops and aircraft and ships from the Republic of Korea, and allow them to deal with North Korea on their own.  Which they could do handily – but they don’t want to.  They saw what having to absorb the Ostzone did for Germany, even without a massive war to begin with.  And Illustrious Leader might still try to pull off some sort of Gotterdammerung stunt and take as much with him as possible. So that might not be all that good an idea, nice as it would be.

Second, similar to the first, and perhaps the most logical – let them stew in their own juices, BUT working with China and Russia (as we do now with Japan and the ROK), together with the IJN and USN and ROKN and PLA Navy, to deploy ABM defenses to take any (and all) North Korean missiles out during the boost phase, as close to launch as possible.  A purely defensive military operation.  And improving and developing new laser weapons, already capable (per reports from DARPA and Army procurement) of killing mortar shells in flight – but primarily to take out the North Korean Army’s artillery aimed at the cities of the South. Refuse to give anything or sell anything to them.  Put the whole country into Coventry, and wait for them to collapse. Don’t even do the silly “no-fly-zone” business: let them fly all they want to, inside their own boundaries. Just nothing in or out.

Third, distastefully, we could go ahead and sterilize the whole place – something even the ROK might seriously consider doing, as well, “ethnic cleansing” or “genocide” or not.  There are several ways to do that.

Fourth would be a massive version of the Marielito Boat Lift from 1980: refugee everyone who wants to out of the country, leaving too few to run anything.  (It only has 25 million people – less than Yemen, about twice as much as Tokyo and 3 times as many as Ciudad Mexico. About 5 times the number of Palestinian “refugees.”) And we know that they are hard workers able to survive a lot of hardship: great additions to nations around the world. But at the same time, we know it would take a long time and spread their contagion (mental) around the world.  And it would probably require a lot of aggressive force to get the last couple of million out.

Fifth, and my personal favorite, all things considered, is the “Berlin Airlift” or “CARE package” option. Be nice. Prepare five million or so CARE packages, each consisting of about 10,000 calories of food, a cheap version of a Hi-Point 9mm pistol, and a couple of boxes (50 rounds) of 9mm Parabellum. Along with a copy of the Declaration of Independence in Korean.  Probably $200 a piece, or a billion bucks, plus parachutes and balloons and floats and all to spread them out all over the country.  After the airlift, seal the country (possibly using the methods I talk about in #5).

Now, the other choices are pretty cruel – and will be very, very hard on children, and on women.  The #5 would, despite some really nasty butcher’s bill counts, probably be a whole lot less fatal than any of the others, including the #4 boat lift. And even if it cost a couple of billion, still be FAR less costly than the rest. And probably almost as fast as the sterilize option.

The point is, something needs to be done. And it does NOT require use of “aggression,” despite claims to the contrary.  Nor does it require getting into a land war in Asia.  And it does NOT mean that we have to work at odds with either China or Russia.

Something CAN be done, and it can be done by – in essence – being nice. Firm, but nice.  We don’t allow rabid dogs to run loose. We don’t allow sick, contagious people or animals to run loose, either. We treat their illness: administer an anti-virus.  But we don’t (or shouldn’t) punish children for the sins of their fathers. (Or of their fathers’ and mothers’ masters.) And we DON’T need to get into yet another war.  Or make ourselves into more of a monster than we already seem to be to the people of the Middle East and Africa.

Mama’s Note: Some very challenging ideas, Nathan. I’ve thought for a long time about how the worst of the East and West coast cities might be cleansed of the controllers and criminals… but still can’t get past the fact that there are a lot of innocent people there among them. And it would require aggression, serious aggression for any attempt at it.

I really like the idea of the “care packages.” I’d contribute willingly to make it happen. I’ll bet we’d all be astounded at how effective that would be.