Can America expand by adding states to the East?

Having looked in North America and the Caribbean, let us now turn to the East, and therefore to the West (as in Western Europe and the British Isles).

Remember this discussion all started with Greenland, politically and sort-of socially part of Europe, although part of North America geographically.  Next to it is the tiny republic of Iceland, home to just 360,000 people and speaking Icelandic, a Scandinavian language.

They are part of Scandinavia, a region that includes at least four more nations: Norway, Denmark, Sweden, and Finland. (“Greater Scandinavia” includes Latvia, Lithuania, and Estonia, and according to some people, Minnesota, Wisconsin, and possibly North Dakota. Though Utah has a large part of its population of Scandinavian ancestry, the religion there negates that.) Mostly monarchies, language is the major barrier, although all four of those nations have majorities (I understand) who speak and read English. And both Denmark and Norway, I hear, still are so primitive that they use gold for money.

All of these are American allies, some very close and others de facto (Finland and Sweden for example, who were “neutral” during the Cold War). But the differences, their own stability, and other factors make them unlikely to want admission to the Union.

In the mainland of Europe, there are no really good candidates for admission, either.  Unless someone objects, I shall pass over these entirely.

What about the Mediterranean?  America has ties to the Med dating back to Columbus, of course. And the FedGov has been involved in the Med since the Barbary Wars, after the UK stopped protecting American shipping there.  Especially since the middle of WW2, the FedGov has constantly meddled in affairs there.  Obviously, Spain has close ties to the Fifty States’ Spanish-speakers.  Italy (or rather, Italians) have been major sources of influence and power in American politics for more than a century. (Nancy Pelosi being just one example.)  Israel (not really in Europe, I know) is close to the heart of many Americans (and the hideous satanic enemy for a lot, too).

But except for the occasional science fiction or alternate history story, it is unlikely that any of these areas might be admitted to the Union.  Any more than most of them have remained in the various empires, which at one time controlled all of the islands and many ports and enclaves on the mainland.  [But it is fun to consider a “State of Middle Earth” (the literal English translation of Mediterranean) as one of the United States, consisting of the Baleric Islands, Corsica, Sardinia, Sicily, Malta, and a united Cyprus. And maybe even the Greek islands including Crete?]

Seriously, it is very hard to see, even desperate, how mainland Europe could have any pieces apply for Statehood, and even less how Congress would accept that request. (Ditto for Africa.)

So that really leaves one place to consider. The British Isles.  This idea has come up many times in science fiction, as readers may know.  One or more pieces, if not the whole place.

I heard the issue discussed more than once during the Troubles (the Catholic-Protestant conflict in Northern Ireland).  Ideas ranged from one, two, or as many as five or six states, using the old Irish kingdoms and creating secular government to replace everything.  The ties of Irish from both modern polities to the Fifty States are very strong, and have been since the 1600s. (The Irish and Scots immigration and footprint on Western Virginia and the rest of the Appalachians played a major role during the War between the States and since, including the independence of West Virginia and the strong Unionist sentiment in Eastern Tennessee, Western North Carolina, and Eastern Kentucky.)  And there is no language barrier.

Brexit and a potential collapse of the Euro and the European Union would trigger some more discussion of admission to the American Union by one or both parts of Ireland. Eire (the South) has nearly five million and Northern Ireland almost two million people.  Highly educated, industrialized, and very much like the Fifty States in many ways, these two make some good sense as multiple States of the Union.

Britain itself is very much similar.  It would mean the end of the Monarchy, of course (unless the Windsors move to New Zealand).  But many in Scotland want just that.  And remember, England was briefly a republican Commonwealth (nearly 400 years ago, at that), which impacted North America and the creation of the FedGov itself. 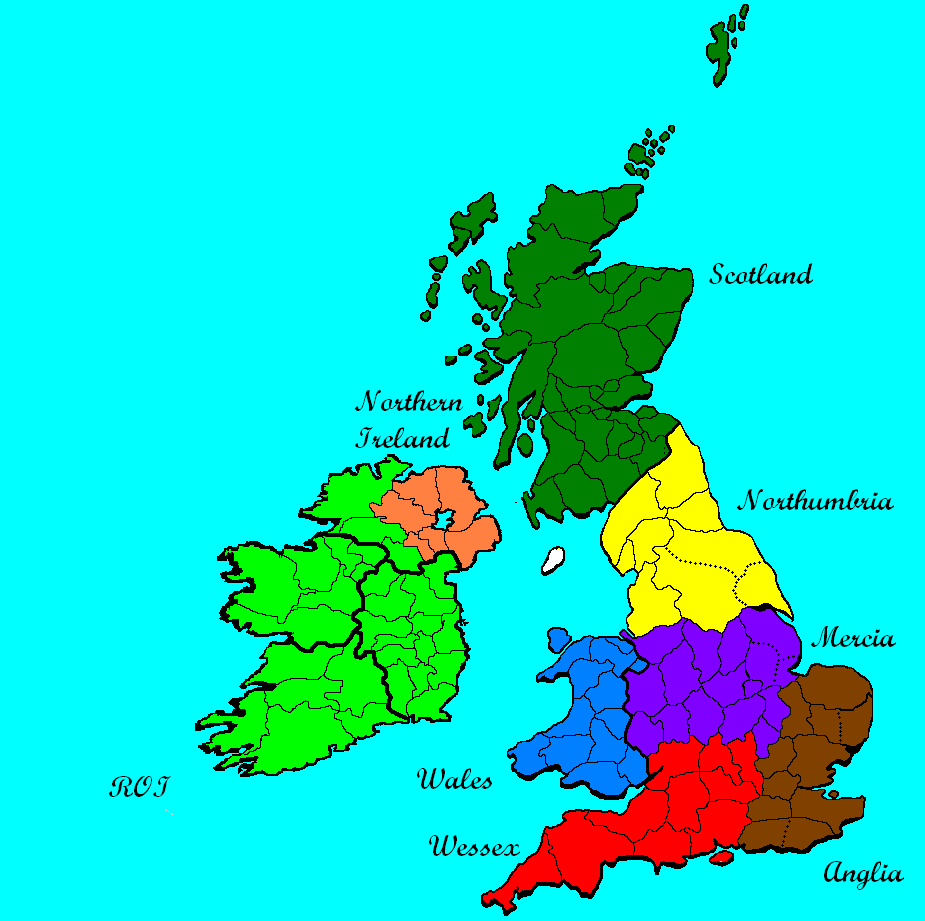 Again, the Fifty States have always had extremely close ties with England, Scotland, and Wales. England has 56 million, Wales 3 million, and Scotland nearly 6 million people. Admission of England as a single State would more than balance California (a point in Congress), but it is often suggested that England be at least four States, or about 14 million each: still making them some of the largest States (and still balancing California).

So if all of the British Isles were to be admitted to the Union, it could be as eight to ten States, which would be far more of an impact than admitting all of Canada or much of Mexico and the Caribbean. Such an action would be likely to lead to far more decentralization and reestablishment of a better-balanced federalism in the now Sixty States.  Many will argue that it is both a logical progression of the Angl0-American alliance of more than a century.  And some would argue that it is bringing history back to where it should be: the mistakes of a few dozen people in the 1700s finally corrected.

If the admission of ten British-Irish States were to be coupled with admitting 10 Canadian States and eight Australian-New Zealand States, it would indeed make the “United States” even more dominant, if it did not also lead to 1984’s “Oceania” at the same time.  A true federal confederation of the successors of the Anglo explosion of the 1600-1800s, and both old British Empires, as a republic, would be likely indeed to dominate Earth.