Note from TPOL: One of the strongest arguments against mandatory, coercive human government is the existence of stupid people. Especially since the synergy of stupidity is a factor of multiplication and not merely addition! This article by Corinne Purtill reminds us of why that argument is so strong.

We underestimate the stupid, and we do so at our own peril.

Not just a danger to themselves. Photo by Reuters/Susana Vera

Stupid people, Carlo M. Cipolla explained, share several identifying traits: they are abundant, they are irrational, and they cause problems for others without apparent benefit to themselves, thereby lowering society’s total well-being. There are no defenses against stupidity, argued the Italian-born professor, who died in 2000. The only way a society can avoid being crushed by the burden of its idiots is if the non-stupid work even harder to offset the losses of their stupid brethren.

Law 1: Always and inevitably everyone underestimates the number of stupid individuals in circulation.

No matter how many idiots you suspect yourself surrounded by, Cipolla wrote, you are invariably lowballing the total. This problem is compounded by biased assumptions that certain people are intelligent based on superficial factors like their job, education level, or other traits we believe to be exclusive of stupidity. They aren’t. Which takes us to:

Law 2: The probability that a certain person be stupid is independent of any other characteristic of that person.

Law 3. A stupid person is a person who causes losses to another person or to a group of persons while himself deriving no gain and even possibly incurring losses.

Cipolla called this one the Golden Law of stupidity. A stupid person, according to the economist, is one who causes problems for others without any clear benefit to himself.

The uncle unable to stop himself from posting fake news articles to Facebook? Stupid. The customer service representative who keeps you on the phone for an hour, hangs up on you twice, and somehow still manages to screw up your account? Stupid. 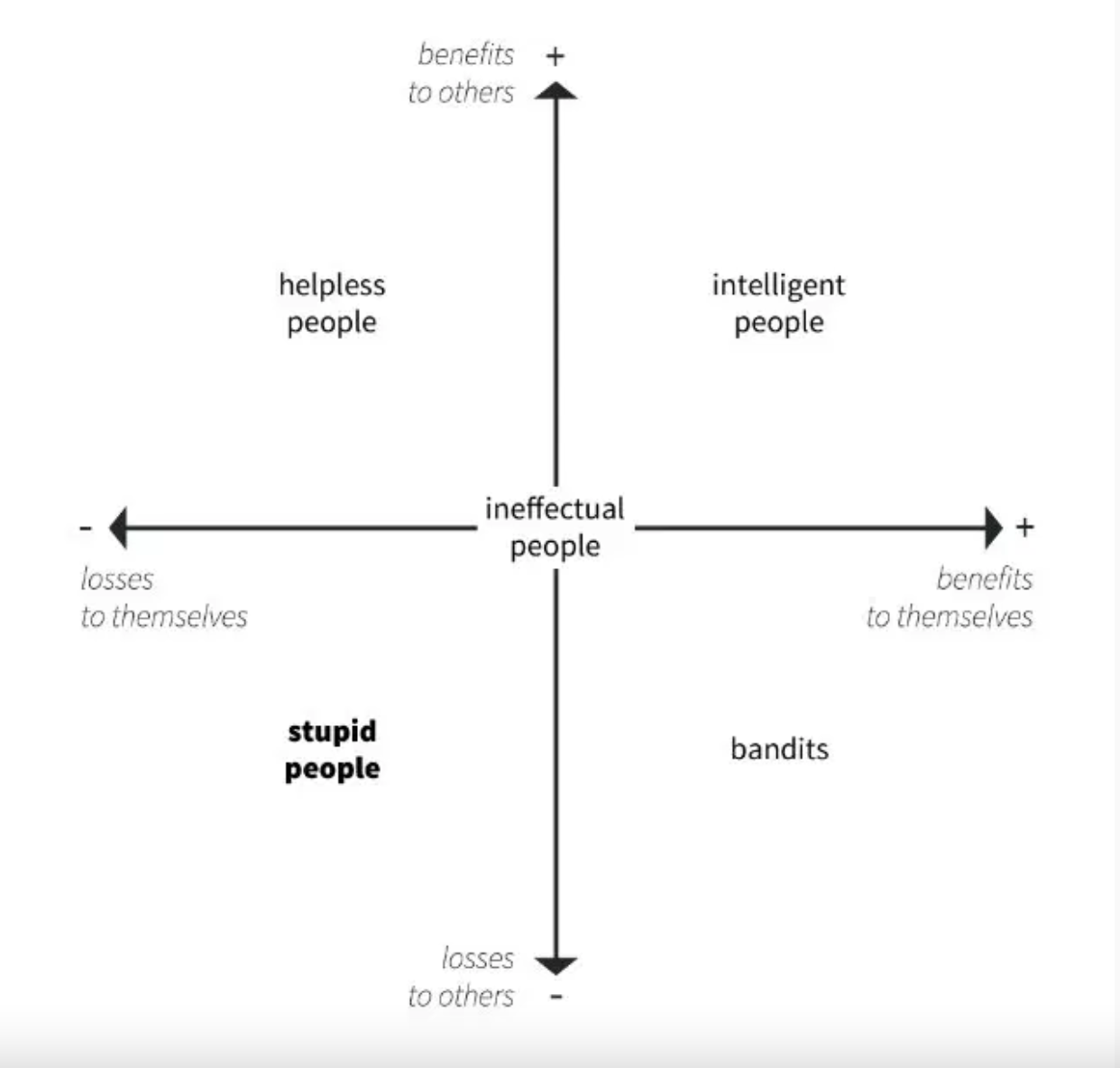 Stupidity, graphed. Photo by Vincedevries on Wikimedia, licensed under CC-BY-SA 4.0

The non-stupid are a flawed and inconsistent bunch. Sometimes we act intelligently, sometimes we are selfish bandits, sometimes we act helplessly and are taken advantage of by others, and sometimes we’re a bit of both. The stupid, in comparison, are paragons of consistency, acting at all times with unyielding idiocy.

However, consistent stupidity is the only consistent thing about the stupid. This is what makes stupid people so dangerous. Cipolla explains:

Essentially stupid people are dangerous and damaging because reasonable people find it difficult to imagine and understand unreasonable behavior. An intelligent person may understand the logic of a bandit. The bandit’s actions follow a pattern of rationality: nasty rationality, if you like, but still rationality. The bandit wants a plus on his account. Since he is not intelligent enough to devise ways of obtaining the plus as well as providing you with a plus, he will produce his plus by causing a minus to appear on your account. All this is bad, but it is rational and if you are rational you can predict it. You can foresee a bandit’s actions, his nasty maneuvres and ugly aspirations and often can build up your defenses.

With a stupid person all this is absolutely impossible as explained by the Third Basic Law. A stupid creature will harass you for no reason, for no advantage, without any plan or scheme and at the most improbable times and places. You have no rational way of telling if and when and how and why the stupid creature attacks. When confronted with a stupid individual you are completely at his mercy.

All of which leads us to:

In particular non-stupid people constantly forget that at all times and places and under any circumstances to deal and/or associate with stupid people always turns out to be a costly mistake.

We underestimate the stupid, and we do so at our own peril. This brings us to the fifth and final law:

Law 5: A stupid person is the most dangerous type of person.

A stupid person is more dangerous than a bandit.

We can do nothing about the stupid. The difference between societies that collapse under the weight of their stupid citizens and those who transcend them are the makeup of the non-stupid. Those progressing in spite of their stupid possess a high proportion of people acting intelligently, those who counterbalance the stupid’s losses by bringing about gains for themselves and their fellows.

Declining societies have the same percentage of stupid people as successful ones. But they also have high percentages of helpless people and, Cipolla writes, “an alarming proliferation of the bandits with overtones of stupidity.”

“Such change in the composition of the non-stupid population inevitably strengthens the destructive power of the [stupid] fraction and makes decline a certainty,” Cipolla concludes. “And the country goes to Hell.”

Corinne Purtill writes about culture, behavioral science, and management. Based at various times in Washington, D.C., Phnom Penh, New York, and London, she has written about everything from terrorism to the search for the Loch Ness Monster. She has a BA in English from Stanford University and reports now from southern California.

Thanks to Steve C. for sharing this first.