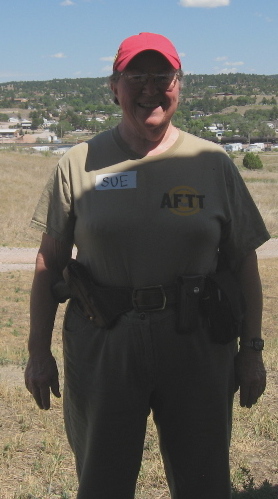 The dedication page of my new book reads: To the man I had to shoot to save my life.

Yes, you read it right. I’ve already had to shoot a man in self defense. Here’s the story.

In 1982 I was living alone at the edge of a small desert town in Southern California. It wasn’t the best of neighborhoods and I was moving the very next day to a better area. Sometimes your luck just runs out.

I woke up about midnight, hearing angry voices outside at the back of the house. There was no fence and people often wandered around at night, but their argument seemed to be escalating and getting closer so I got up and put on a robe. My little dog was barking up a storm.

Looking out the front window, I saw a man standing by the driver’s door of my car on the street, obviously trying to get into it and well illuminated by the full moon.

I got the shotgun and opened the door a crack, then shouted at the man to get away from my car and go away. He just looked at me and went on trying to get into the car.

Then I made a big mistake.

I walked out onto the sidewalk, closing the door behind me to keep the little dog from getting out.

At that point the man started to walk toward me, in a few words telling me just how he would hurt me. I raised the shotgun, but he just sneered and said confidently, “you won’t shoot me” and kept coming.

He was still too close to my car, so I aimed the .410 shotgun just over his head and pulled the trigger.

I saw the shocked look, just before I saw the blood on his face and chest where the tiny #6 birdshot had hit him. He turned and ran away, destroying a low ornamental fence in the process, but never even slowing to untangle it from his legs.

Elapsed time? Probably not more than half a minute from the time I walked out the door until he fled. The time between his sneering comment and pulling the trigger? Probably a few seconds. The car was no more than 20 – 25 feet from the door.

Emergencies happen fast. I basically had a choice between shooting at him or being killed, with not much time to make up my mind. I was lucky to have the gun, to have taken it to the door with me, and lucky to know something about firing it. Some miracle had made me keep it loaded the two years since I’d left the farm where it had been used on squirrels and other varmints.

Shaking and almost sick to my stomach, I went back into the house and locked the door… made sure every window was locked and took a long hot shower. I had no phone, so could call nobody. Since the sheriff’s office was 32 miles distant, calling them would have been a joke anyway. Everyone in that town just had to live with that fact. I never did report it, not being at all sure what their reaction would be. He obviously didn’t die, and didn’t report it either.

Eventually I went back to bed and tried hard not to think about any of it. As with most things we don’t want to face, I mostly succeeded.

It was almost 25 years, and a few self defense classes later when I realized all of the mistakes I’d made and how close I came to death or terrible injury that night. I was very, very lucky things turned out as they did. And he was very lucky I hadn‘t aimed that gun straight at him.

What were my mistakes?

1. I went from a relatively secure position in the house to a seriously exposed position on the front walk. I basically cut off my only avenue of retreat when I shut the door.

Since there had been others arguing with him only minutes before, there was every reason to suspect he was not alone and that others could have attacked me from behind. It just never crossed my mind… Actually, I was sure he would run away as soon as I shouted, or at least as soon as he saw the gun.

Once I was under attack, understanding my peril and scared to death, I suffered from “tunnel vision.” I was completely unable to see or hear anything but the threat in front of me. I probably no longer even heard the dog barking furiously in the house. This is very common under such stress and can only be overcome with serious training and practice.

2. My gun held only one shell at a time, and I had no others with me. If he had continued to attack after I’d foolishly shot over his head, he would probably have killed me. It is highly unlikely I’d have had time to reload anyway.

3. My major mistake was in confronting him, without knowing what to do and especially without an adequate weapon.

So, should we all just cower in the house or allow ourselves to be attacked and robbed? Only you can answer that for yourself. I did what I thought I had to do at the time, and I would again. If there is a next time, however, I won’t make the same mistakes.

In the course of my training I’ve given this all a great deal of thought. I was amazed and unhappy to discover that many of the handgun and self defense classes seem to ignore or gloss over one of the most important parts of helping people prepare for just such an encounter: practice on your own.

Skills take time to develop and a class or two for a few hours can begin the process, but can’t provide the ongoing practice required to cement those skills into the reflexes and muscle memory needed for fast, effective action under stress. If you understand how the mind and body works under this kind of stress, you’ll understand why you must be prepared to react instead of trying to remember what it is you’re supposed to be doing or agonizing over a decision when you may have only seconds to live if you don’t ACT immediately.

This book of practical exercises grew out of that perceived lack. These are the exercises I do myself on a regular basis, and teach to all of my classes. I believe that these exercises could make the difference between a successful defense, and death or serious injury. It’s too important not to at least consider.

A man (or anyone) who attacked me today would face a calm, confident, prepared and VERY well armed woman – any time of the day or night. I would hope that he was able to perceive his disadvantage and just go away.

Some would, and some would not.

I’ve already made mine.

[The book, “I Am NOT A Victim” is no longer available.]