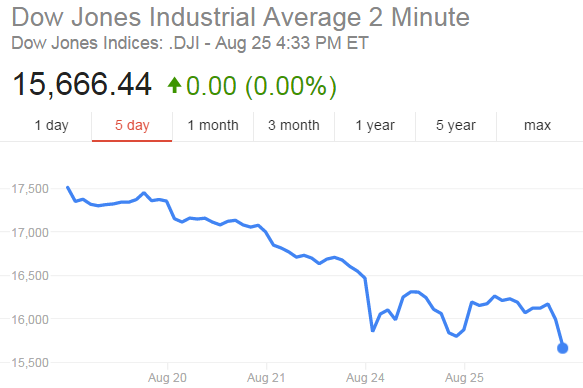 The chart says it all.  This is just the US: China looks much worse, and virtually everyone who has any brains at all is saying that the moment is finally here, after months of warnings.  Other countries are feeling the impacts of China and they are realizing that what I call the Crash of 2009 (NOT the “Great Recesssion” garbage) is still with us, and that we can blame ourselves for “believing in government,” and government’s folly, for this mess.

I expect there to be temporary “rallies” and people thinking (as the radio constantly announced) that this is “just a correction” but don’t count on it.  An important thing to remember is that this is PAPER wealth:  there is still food and land and buildings and work to be done and families and friends and communities, even as the nutjobs in DC and NYC and Shanghai and London and Tokyo go ballistic.

Mama’s Note: The MSM and a great many people around the ‘net are blaming China for all this. China isn’t to blame for this…. any more than any other government. They just make a handy target. People seem to have forgotten the economic crisis going on in places like Greece and much of Europe for many years now. The cause of this and all the other such problems is the governments themselves, China included. The global problem of some people having power over other people, to control their lives and spend their money. And then there is the unfortunate myth that these “rulers” somehow have the authority to do so… which gives them the power.

The Fed Is Spooking the Markets Not China
By Peter Schiff

Have no illusions, while most market observers are quick to blame the sell-off on China, this market was given life by the Fed, and the Fed is the only force that will keep it alive.