One of the amazing things about America, about the Fifty States, is that we have done so much to reduce poverty and deal with homelessness, hunger, lack of medical care, and more DESPITE the ever-increasing burden of government.  And the parasites who live off government and the money it steals from taxpayers. Just as our economy is somehow able to survive and even thrive despite being constantly bled by the bureaucrats and their clients and masters and contractors.

This may be the case worldwide.

We are reminded, by Christ Jesus Himself, that “the poor you will have with you always,” and nothing in the last 1989 years (or so) has proven Him wrong.

But the situation IS getting better. Consider this: 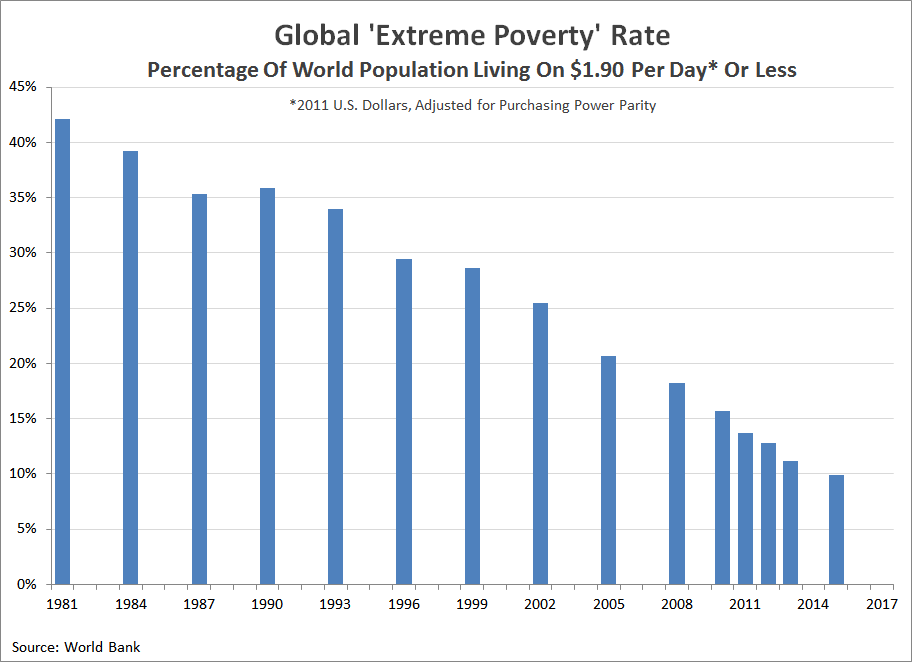 I found this in an excellent article from the Independent Institute, “… Deregulation Reduces Extreme Poverty.” In it Craig comments on the startling World Bank report.

This is NOT something that you are going to hear in the mainstream media, from politicians (regardless of which old party or faction they belong to), government bureaucrats, academia, or your run-of-the-mill Regressive/ne0-liberal/Tranzi type.  Actually, you won’t hear these truths:

Nor will you hear a third truth: that much of this improvement is IN SPITE OF, and not because of, government.

That is obvious to any reasoning, objective, lover of liberty. These people (and all their buddies and minions) find it in their “best self-interest” that we (everyone else) believe that (a) poverty is growing and we may slide into it at any time, so (b) government action is essential to ensuring that the number of the poor doesn’t grow rapidly or get into worse circumstances.

In particular, this puts the lie to the constant refrain of the Regressives.  You know the one: “The richer get richer and the poor get poorer.”  In reality, while the rich often DO get richer, the poor also DO get to be less poor.  Not wealthy, maybe, but certainly not the extreme poverty that was the lot of the vast majority of people in the last 6,000 or so years.

I’ve recently, for various reasons, discussed just this with a number of people.  Here in the Fifty States, the condition of virtually all people in poverty is not what most of us think.  The average person (yes, even children) in poverty here in America is wealthy in comparison to the circumstances of the poorest of the poor and even the next couple of levels up, in Africa, Asia, Latin America, and even much of Europe.  Yes, even those in poverty on Indian reservations. Especially as compared with the average condition of those who have lived for most of the last 6,000 years of human history.

(I’m not saying that these Americans are not very poor, especially relative to most other Americans.  I realize that there are still people without electrical power in their houses (or whereever they stay at night), without running water, and not really sure where their next meal is.  And that there are still people who have no home to claim, other than a car, a patch of sidewalk, or under a bridge. And I realize that it is not always their fault that they are in such straits. But these are a very, very tiny percentage of the 300+ million who live in the Fifty States.)

If we were able to set aside the regulations, the theft, the lust for power and wealth, and hate in government and created by government, we’d find the rate of poverty – extreme and not so much – to be even less.

Especially in those parts of the world where the parasite of government (coupled with the effects of hate and aggression in general) has truly made life miserable by anyone’s standards.  I’m talking about the barrios of Central America, the hideous socialist “paradise” of Venezuela, the hate-torn lands of Nigeria and South Sudan, the war-torn regions of Syria and Libya, and even the freshly-radiation-hit lands of Russia or the like.

And I do not blame government alone for poverty – indeed, the opposite.  Much of the poverty, especially in lands like our own Fifty States, is a result of foolish and stupid choices and actions of parents (or other ancestors) or the person themselves. And on non-governmental aggression in the form of abuse. And sometimes, evildoers who abuse people (admittedly, often government-enabled, or using government).

The list of the various government actions and their direct and indirect impacts is too long to put here, but we can think of those things right in our own families, circles of friendship, and communities.

Which brings me (and many others) to wonder just how much better things would be if we just had the same level of government as in 1819, 1919 or even 1939 or 1959 or 1979.  There would still be poor – them we will indeed always have with us, for many reasons.  But more of the rest of us would be able to help them directly, and hot have to shoulder the burden of the poor AND the burden of the parasites that feed on us, our society, our economy, and our liberty.