You may have seen this picture. 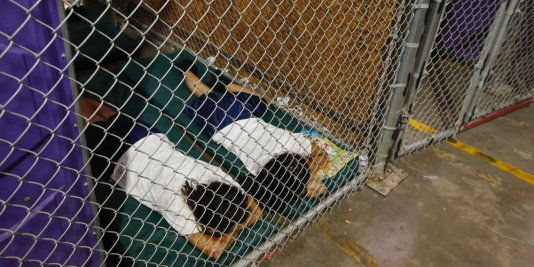 Apparently a lot of people have, thanks to the former 1600 PA squatter’s speechwriter Jon Favreau. He had shared the images on Twitter, mistakenly believing they were taken during Donald Trump’s presidency, and attacking the Trump administration for inhuman treatment of immigrant children.

But apparently, the photo was taken at Nogales, Arizona, in 2014. For those whose grasp of history is limited, that was during the LAST administration, when the speechwriter’s boss was in power. These two people – apparently two young teen girls – are border jumpers.  Detained by government goons.  American government goons.  And put into poor facilities.  Caged like animals.

And it was done by government employees during the regime of the last person to squat in the White House.  As was revealed by a lot of people who recognized the picture.

Immediately all the people (or at least a large, vocal number of them) started blogging about how this was necessary and just so very temporary before they could be placed with loving families with carpets and yoga pads on the concrete floors, and where the steel mesh was plastic coated and outside the house (home), not right there in the bedroom.

And those who are opposed to the progressive, liberal, Tranzi flavor of statism immediately started screaming about hypocrisy. Others pointed out that both regimes had and have immoral and inhuman policies.  And still more people popped up to defend the actions back in 2014.  A good summary can be found in Business Insider.

Funny, huh?  All of a sudden, because it happened four years ago, it wasn’t so evil to treat these two young girls this way. At least according to those who oppose the present guy in the White House, and support the guy that was in there before.

(Of course, this is hardly the first time that this little mortality play has been presented. We find it all the time.)

But most of the commentary misses an important point. Neither of these two people in the White House specifically fingered these children and told some thugs to put them behind chainlink on a concrete floor.  (Or a dog kennel, as some people claimed.) They didn’t need to. The actual thugs who did this in 2014 are probably still working “for the People” of the Fifty States – unless they have retired on a fat pension.  Or got fired for saying some banned name or being sexist towards a superior.

Why?  Because that is what government does: it mistreats people.  It uses force to make people do things that they don’t want to, and to stop doing things that they want to that don’t harm anyone else. (Oh, and once in a while government stops people from doing something that harms people.) And more often than not, the force that the government goon uses is far in excess of the act that the disobedient person committed.

The key point is that government is acting aggressively against these people. This is NOT a “defensive” action. This is not a response to aggression on the part of these young people: it is aggression against them: it is initiating force.  It is wrong. And it is not a rare action: it happens time and time again.

It really doesn’t matter whether it is a democrat or a republican who is in the White House. These things are going to happen.  Not just once, but time and time again.  It really doesn’t matter who is in power in Congress.  Or the local statehouse, or the local town.  Republican, democrat, conservative, liberal, progressive. They belong to, and incite and support and  defend, government.  Government which by its very existence is a rebellion against the natural order, against the Creator. Government claims to have some sort of vague moral authority to have a monopoly of force, and to be able to initiate force against people.

And it doesn’t matter whether the people who actually, physically ordered and put these children in this cage are kind and loving to their families and pets, or believe that they are serving the People by doing this, or even that they believe that they are protecting the Fifty States. They are demonstrating that they cannot be considered “good” because some of the actions which they are doing are evil.  Wrong. Sinful. And when you get right down to it, it doesn’t matter whether they agree with the regime, or with Congress, or not.  Or whether they think that what they are doing is wrong or right.  That is subjective.  Objectively, they are initiating force, based on a false understanding of what is right or wrong.

And they will continue to do so until someone (or Someone) slaps government down.  And the people who actually physically do these things that government authorizes, orders, and approves.