How do we fight evil?

You may have read this story recently: A national lemonade company is helping kids busted for illegal lemonade stands. 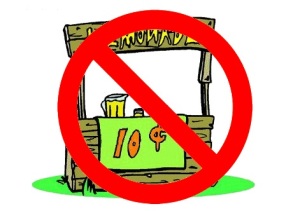 The Company is CountryTime. It is their response to a problem that has been around for years, but seems to either be getting worse or getting a lot more publicity.  In cities and counties all over the nation, cops and “code enforcement” officials are busting kids for “illegally” operating lemonade stands without benefit of their (government goons) permission.  Without business licenses and health official permits and inspections and without paying the fees.

I think CountryTime’s heart is in the right place. But isn’t it better to fight for the right for kids to be kids? And not teach them or help them kowtow to government goons? Even if it is in a fancy neighborhood like Stapleton in Denver. Much less teach them to fear Mrs. Grundy, the snitch every neighborhood has, complaining.

Isn’t it time (hasn’t it always been?) to teach children to live in freedom? Not bail them out by just paying their fines?  By helping them to fight against the totalitarian state? Against the tattletales, the nannies, the thugs?

Isn’t it time we teach our children and grandchildren to fight against evil?  Evil in every form?  Even when it disguises itself as an “angel of light?”

We don’t do that by just rescuing them when they get in trouble with the snitches and the bureaucrats and the jack-booted thugs.  I am not saying it is wrong to do that: as I said, I applaud what CountryTime is doing.  Just as I appreciate the work of the Institute for Justice, the Home School Legal Defense Association, and the Mountain States Legal Foundation.  They defend children, their parents, and organizations against the cruel, evil behavior of the gov-goons.

But more is needed: we need to prepare those children and families IN ADVANCE not just to defend themselves from the evil, but to go on the offensive against it.  To prepare themselves and take action to counter – and preempt – the actions of government. To teach them not just to defend themselves against the bully in the school, on the streets, and in the marketplace.  Instead, teach them to demonstrate to the bully that this is one supposed victim that won’t be easy or fun to torture. To demonstrate to the snitch that telling tales is not something to get them praise and brownie points with the authorities, but isolation and shame from their neighbors and those they try to do business with.

“No, ma’am, I’m not interested in mowing your lawn.  Nor is anyone else in the neighborhood.  Not after you complained to the cops about Suzy and Lisa selling lemonade?  Relatives?  No, ma’am, not friends either: they are little kids.  But it ain’t right to treat ’em like you did. Oh, and I am friends with Denise, and she said I could tell you the next time you want her to babysit those kids, she’ll say no.  Because of how you treated Suzy and Lisa.”

“Neighborhood Plumbing, how may I help you?  Oh, hello, Ms. Grundy?  The drain broke under your kitchen sink?  You need me to send John over to repair it?  Oh, I’m sorry, we aren’t doing business with you any more.  You might call City Heating and Plumbing or Handyman Frank, but they’ll probably tell you the same thing.  Why?  Because you ratted to the Town Hall about how you didn’t like the Smiths growing vegetables in their front yard?  What’s wrong with that?  What business of it is yours?  It’s ugly?  That may be your opinion, but maybe they think those pink flamingos in your yard are ugly, too.”

“Oh, hello, Officer Heavy, how are you doing?  I’m sorry, I didn’t realize I was blocking your cruiser.  It is such a narrow street, isn’t it?  When everyone is parking on both curbs.  Sorry, I was stopped to pick up a turtle that was walking across the road; I didn’t want to squish it.  Where were you going in such a hurry? Oh, kids were lighting off firecrackers in the next block?  That’s illegal? It is still two weeks to the Fourth of July and they can’t have fireworks until the week of the Fourth?  Were you going to haul them off to jail?  Oh, just give their parents a ticket?  Ever think about what we are supposed to be celebrating on the Fourth?  Sorry, just idle speculation, of course, I’ll move out of the way for you.  Gee, don’t hear any more firecrackers going off.”

There is, of course, much more to fighting evil. And defending the innocent is an important aspect.  But the more we can PREVENT evil from harming the innocent to begin with, the better.

3 Responses to How do we fight evil?