Notre Dame, a symbol of our times 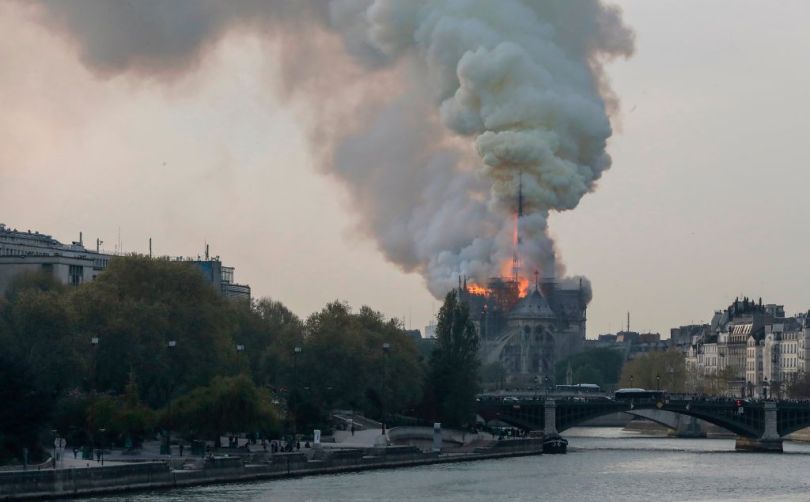 Today, on an island in the Seine, the magnificant Cathedral of Notra-Dame-de-Paris is burning, perhaps to the foundations.  The famed edifice, the number-one tourist attraction in France and perhaps all Europe, with 18 million visitors a year (easily 6 times that of Mount Rushmore), and still the seat of Roman Catholic archbishops and cardinals, is an irreplaceable loss, even if it is rebuilt, as it almost certainly will be.

Built in the 13th Century, rebuilt and improved over the centuries, it is both a religious and political symbol of France, and even today, the European Union, built in the spirit of French arrogance and imperialism.

It was built, originally, “to the glory of God,” although God never in the Bible commanded anything other than a simple tent of meeting (a tabernacle) be constructed to worship Him.  He permitted Solomon to build the magnificent Temple in Jerusalem, which was destroyed in war, rebuilt by Nehemiah and Ezra, made even more stupefying by Herod (the Great), and again destroyed in war, that time the Jewish-Roman War.  But none of these, nor any of the cathedrals, basilicas, or even simple meetinghouses, were ever built at the command of God the Creator.  Certainly His Son did not order such, and foretold the destruction of the Second Temple in Jerusalem in AD 70.

That Temple survived for almost 600 years – less than the nearly 770 years this Parisian cathedral has (building started in 1160 and finished in 1250).

But like all things human, they decay and are destroyed – even if again rebuilt.  This huge monument survived the French Revolution and Napoleon’s empire, the First and especially the Second World Wars. But ultimately, though ruins (whether pyramids and tombs or temples or walls), human physical creations do not last.

Nor do human nonphysical creations: nations and societies, clans and governments all ultimately fail and disappear. Ironically, we see that better than ever today, even though we pretend that human-made things will last forever. (Like those plastic soft-drink rings and plastic bottle caps.)

We are just past a century in which empires that had survived for hundreds, even close to a thousand years, crumbled and collapsed: Russia, Turkey (the Ottoman Empire), Austrian, German, and even finally, the French and British Empires all have succumbed to the ravages of time and the machinations of men.  The Russian Soviet empire, too, failed.  Now only the American one is left, and to many of us, seems to be teetering on the edge of destruction.

The same can be said of human institutions other than governments. Although the Roman Catholic Church claims to have been founded by Christ himself in AD 33, it really did not take anything like its modern form and organization until about 600, well after the Orthodox (Greek and Coptic) and other Christian denominations had been long in existence. Monastic orders in Egypt, Greece, and Asia Minor predate even those. Other human organizations, such as the Free Masons, various Indian and Chinese and Japanese religious organizations, and a very few dynasties, may go back just a few centuries or lay claim to lineages that extend back to 2000 BC or even earlier: Judaism as a religious and philosophy and society, though not as an organization, can date itself back to about 1400 BC or earlier, to the time of Moses and the giving of the Law on Sinai in the Arabian desert.

I am reminded of the story of the old New Jersey farmer, who proudly displayed an axe to a visitor to his barn.  “My great-great-great-great-granddaddy was given this axe by George Washington himself!” The visitor expressed awe over what excellent condition it was in and how the family must value it. “Of course, it’s had a dozen new handles and six new heads,” the farmer explained.

So it is with human buildings and institutions.

There is nothing wrong with humans glorifying God, by building such as the Notre Dame Cathedral, except that all too often, the glory seems to go to the humans who do it: the popes and bishops and kings and emperors and presidents and Assemblies and Congresses.  Often and usually not even to the people who actually build these things and sustain them: masons and carpenters and coppersmiths and rebels and private soldiers and taxpayers and the like.

But, being human, they change.  No one in 13th Century France would have believed that the line of Most Catholic Majesties that sat on the throne of France would fall from power, or that a series of agnostic (at best) consuls and presidents and prime ministers would replace them.  Much less that mobs of rebels would seize and desecrate it, nor jack-booted storm troopers march through it, nor Muslim immigrants plot to make it a mosque. Nor that irreligious and irreverent tourists swarm through it.

In some ways, it is amazing that Notre Dame has stood as long as it has.  The mobs of Revolutionary France could have torn it stone from stone; German dirgibles or dive-bombers could have struck it, or a Soviet H-bomb leveled it, at almost any time in the last century.  But the institutions that built it and sustained it are vastly changed or dead: the monarchy, for one.

So too, the time will come for all human institutions to fail and fall.  The American Republic is (I and many believe) dead, but its remnants live on.  Yet even they will go away, sooner or later: the American Presidency, the Senate, the House of Representatives.  As will the State governments: even those which predate the American Union, like Virginia, by centuries.  And the ruins (or the crater) of DC and New York, Philadelphia and San Francisco, Houston and Denver, will be seen the way we look at the ruins of Thebes or Babylon or Ninevah today.

But humans, and the liberty that is the gift of our Creator to us, will not perish, not die. Not as a race or peoples, although individuals will of course die.  As will their organizations and families and societies.

1 Response to Notre Dame, a symbol of our times