Plans, hope and our future

The quote below from the Bible is, of course, religious.  But even for nonreligious lovers of liberty, it carries a good and important message. 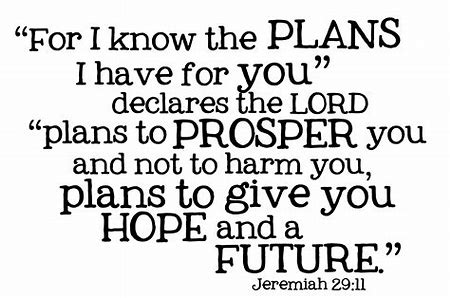 This is worth pondering as we celebrate the 243rd anniversary of the American Declaration of Independence.

A theme of many Libertarian Party political campaigns in the 1990s and 2000s was “peace and prosperity” – quite similar to this prosperity, hope, and a future.  In times of peace, people can hope and look to a future that is not possible in periods of war and conflict.

Too many people think of the Creator as a nasty old man up in the clouds, demanding worship and obedience, and ready to strike us down with bolts of lightning if we do not kowtow and obey his every whim.

That is a horrible and total contrast to the God we see in this verse from Jeremiah; the God who gave us liberty and love. And in many other passages of the Bible.

I am a libertarian – a lover of liberty – because I am a christian – a follower of God.

God offers us choices: we are the ones who choose.  Do we follow the path of liberty or the path of tyranny?  The path of prosperity or the path of decline and decay?  The road of peace or the trail of conflict? He does not force us to follow His plan; He offers it.

Religious impulses and beliefs, as well as study, contributed much to the decision of the Founding Fathers to secede from the British Empire.  And to their dedication to that effort. Yes, there were economic and political considerations, and there was a considerable element of outright greed and rebellion against authority.  But without the religious elements, I don’t think that the independence movement would have succeeded.  (I realize that this is an opinion that many in our modern liberty movement will denigrate and reject.) I don’t think that the Americans would have fought for almost eight years without many of them understanding that God was with them in their fight for freedom and human liberty.

The christian’s hope for the future is not just for Eternity. It applies to here on Earth as well. We do not just look back to Christ and ancient history, but forward to the rest of our lives here, and those of our children and descendants. And we can share that hope and that future with others: peace and prosperity, liberty and freedom. In part by living and preaching the truth. By living in the light, and sharing that light with others.

For those who are religious, please note, I am NOT preaching a “social gospel” or anything like it.  I just point out that in the last 2,000 or so years, and in the last 250 or so years, faith in God and faith in Christ and the liberty which is our gift from Him have been tied to improvements in the standard of living, liberty, and society.  There have been diversions from that upward path, in various ways.  (Both religious and socio-political.) But in general, we DO have a future that is full of hope.

Are we going to mess up?  Of course, and often.  But we can recover (as we have) from such things. (With God’s help.)

For lovers of liberty, regardless of your religious belief and life, there is hope for the future, and we DO have a future.  A future of liberty and freedom, peace and prosperity.  Not perfect, but enough to let us live lives that can be much better than in the past.

The choice is ours.  As are the actions that are needed to implement that choice.