By Nathan Barton
Thanks to Scott for passing this one on. 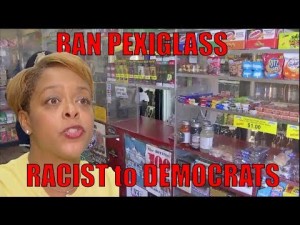 Information Liberation (seriously, that’s the website’s name!) tells us that Democrats who are “people of color” (and their allies and supporters and instigators) are demanding that bulletproof Plexiglas barriers in stores must be removed as they are demeaning and disrespectful to the majority African-American population of the city.

Indeed, a law mandating their removal has already been approved by a City Council committee.

These barriers are installed in shops and stores in high-crime areas, to protect clerks from physical attack (including being shot, stabbed, and grabbed and pulled over the counter by robbers) and to protect items for sale from being stolen.

I’ve seen such barriers installed in convenience stores in various cities, including many in high-crime areas and many where there some potential vulnerability (isolated locations, high-traffic areas, etc.) has been identified by the store’s security and protection specialists.

This comes across, of course, as Democrats (Tranzis) concerned that many of their constituents will be denied job opportunities and income-replacement by not being able to rob many locations and steal food, booze, and cigs – as well as being denied the enhanced self-esteem of demonstrating what mean m-f- they are.

Obviously, the politicians’ concern is not for the convenience store and other shop employees, who although a majority are black or other “minorities,” have steady jobs and presumably a higher (legal) income than those who are forced by the evil machinations of racist business owners, landlords, and government officials to resort to bullying, mugging, robbery, shoplifting, and other ways to be able to survive and maintain at least a minimum standard of living (enough booze, recreational pharma, junk food, and sex) and hold their heads up high in front of their gangbanger peers.

And it is obviously very demeaning and disrespectful – even racist – to try and deny these people in Philly the same privileges and opportunities for theft and abuse that Hollywood celebrities, politicians, and other perverts and predators have. Clearly, to remove barriers to opportunities to improve their lot is showing the brotherly love for which the city is named. But it doesn’t come across as exactly a sympathetic approach to many people.

Of course, heaven forbid that these store clerks have the means to protect themselves, such as “allowing” them to be armed – both to deter attacks and robbery AND to be able to defend themselves if (when) it happens. Especially given that the “disadvantaged” people eager to improve their lot are able, somehow, to afford guns of their own, but have to steal food and beer and condoms (assuming that they bother with such).

Mama’s Note: I highly doubt most of these criminals actually purchase their guns, at least not on the open market. Most guns used in crimes are stolen, at some point, some many long years in the past. They may buy stolen guns, or steal them on their own of course.

It is not, of course, just the policy of the municipal government of Philadelphia (including its police force) to disarm potential victims (and thereby guarantee that many of them will BECOME victims). It is generally corporate policy as well – many chains of supermarkets, convenience stores, liquor stores, and the like demand that their employees give up their basic human rights as a condition of employment. Rights like self-defense. And all too often, to life. They would rather see their workers killed or wounded than stand up to public pressure and especially the pressure of the powers-that-be to keep people disarmed. You can be sure that if this stupid law passes in Philadelphia, that the vast majority of businesses will quickly remove even the little protection afforded by Plexiglas and pass-thru windows and drawers.

The FedGov is tacitly an accomplice to this disarmament, if for no other reason than that the court system refuses to take a stand on the clear requirement in the Constitution to protect the right of the people to keep and bear arms.