The Food Stamp Program, originally created as part of the “New Deal” of the evil monster-in-chief F. D. Roosevelt and reinvented again and again by machine politics and a succession of monsters-in-chief like LBJ and William Jefferson Clinton, is in the news this week. Food stamps are now officially the “Supplemental Nutrition Assistance Program” (SNAP), mainly provided by Electronics Benefit Transfer (EBT) debit-like cards.  Which is why they are in the news.

In seventeen states, on Saturday, the entire system crashed, no one’s EBT cards worked.   This came very close to triggering several riots, no doubt because people feared that the government shut down had finally come to the point of cutting off the billions in food stamp money handed out to almost 50 million American residents.  It was variously reported that a test by Xerox, the vendor, may have caused the problem, others said that an upgrade triggered it: it was restored some six to eight hours later.  Apparently there were no actual riots.

In ONE state (Louisiana), the exact opposite happened: their “debit cards” (they debit YOUR account as a taxpayer to feed THEIR mouths) HAD NO LIMITS.  So a WalMart was essentially looted. 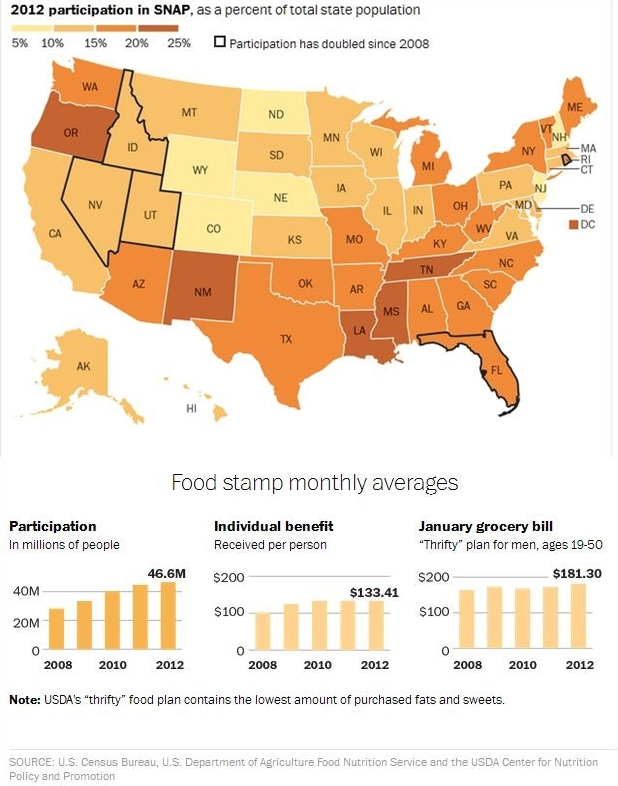 The amount of welfare provided through this program is astonishing, as the above maps and graphs show.  The variation in states is also truly amazing. Because of this great difference, the two events this weekend had significantly different impacts.  For example, as Louisiana has between 1/5 and 1/4 of the entire population of food stamp recipients, the looting could have been done at hundreds of stores – so it could have been much worse.  Those same large numbers in other states, with no “money” on their cards, COULD have resulted in riots and flash-mob-style looting.  But apparently, it did not.

Tomorrow, some thoughts about some of the states and why they have low and high participation.