The White Rose – in defense of liberty

I was again reminded of die Weiße Rose (in English, the White Rose), today. 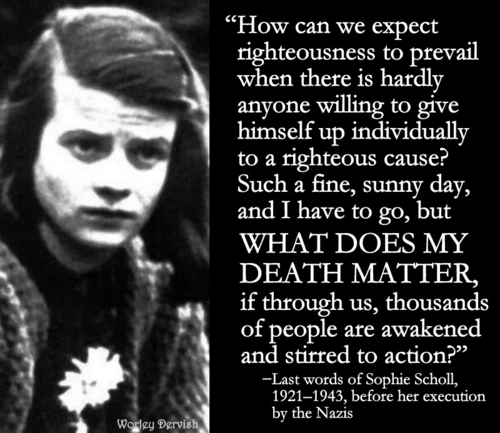 That movement, led by Sophie and her brother Hans, resisted the Dritte Reich (Third Reich, Nazi Germany), and its totalitarian government. It was extinguished by the regime through judicial murder of them and others.

2018 was the 75th anniversary of that extinguishment. When Sophie was beheaded by the Reich, she was 21.

That was on 22 February 1943.  Just over two years later, the regime was gone, ground into rubble and flame and death by the Allies. The deaths of the White Rose conspirators are a sad and horrible but memorable incident in the history of human liberty.

I at first was surprised at the fact that the modern American Regressives – the Tranzis and their ilk – did not seize on this timing and did not attempt to use the White Rose to push their own agenda. Did not Sophie and her fellow rebels suffer at the hands of the evil fascists? So why not compare modern Social Justice Warriors (SJW) to this girl and the rest of the White Rose?

Until I realized that the American “Left” and all its minions and schills and masterminds and puppetmasters DARE NOT bring up the Scholls, perhaps the most well-known (in the West) of Germans’ own internal resistance to Hitler and his operations.  (Not the most famous of the opposition to Hitler himself: that is obviously the Valkyrie conspiracy which tried and failed to kill Uncle Adolf. But opposed not just to Hitler and Fuehrer but to the German National Socialist government and its actions, including the war against most of the world at the time.)

You see, what Hitler did for the most part was right out of the dreams of our wonderful Tranzis.  Sure he “didn’t do it right,” and he had some of that evil stuff like being “anti-Semitic.”  And attacking all those countries.  And he was a “fascist.” But without that trademark mustache and a different haircut, he’d fit right in any anti-gun, anti-bigot protest or campaign rally for (insert Regressive candidate name here). The NSDAP platforms (when they still did those for elections) would be about 90% compatible with most American Democratic platforms in recent years – even more with those of many Democratic candidates.  (And probably 60% compatible with GOP platforms, I think.)

Not only that, but in recent years, more and more American candidates and political leaders (mainly but not entirely on the “Left” in the Democratic Party), have expressed opinions and taken actions just as anti-Semitic, racist/bigoted, aggressive, and immoral as the NSDAP. Here are a few:

And the White Rose, from what I’ve been able to read, wasn’t just opposed to HItler’s excesses, but to the overall actions of the German and subordinate governments.  Not totally opposed to ALL government, or necessarily most: they were neither anarchists nor minarchists. But certainly not desiring to have anything close to a totalitarian government in control.

There is no indication that they were actually pacifists, either.  Their opposition was non-violent, but that may have been as much due to understanding that they could not overthrow the Hitler regime as to any philosophical belief. (Of course, most Regressives here in the Fifty States are also not really pacifists.)  Of course, again, Tranzis want everyone but themselves to be pacifists: to roll over and play dead for the elites.

So the only reason that I can think of for the modern Tranzis to NOT celebrate the White Rose is because they could not come up with a way to hide the natural consequences of the stand that the White Rose took.  And died for.

These people in their early twenties and late teens in Germany in 1942 and 1943, were of the generation born just after the Great War (World War One).  Hitler had taken power a decade before, and they may not have remembered much except the Third Reich in their childhood.  They were the product of years of indoctrination in the public schools (no home-schooling in Germany then). Most of their generation were fanatical supporters and followers of Hitler and his regime.

Yet they were able to overcome that background, and were able to learn and then work towards the goal of liberty.

This should, I think, be a great encouragement.  Not all of Gen X and the Millennial Generation are mindless SJW or Regressive Tranzis. And there is always a growing number who will realize that what they have been taught and believe is NOT true.  And of that number, there will be some (and more and more) who do understand the principles of liberty, responsibility, risk, freedom, and all the human traits (and gifts of God) associated with them.

2 Responses to The White Rose – in defense of liberty