A look back at the Declaration of Independence

Today, in 2019, we hear the Founding Fathers and even the Declaration of Independence and US Constitution are racist, hypocritical, and therefore to be treated with contempt and anger.  And the principles contained therein are to be rejected and replaced by “true” democracy. 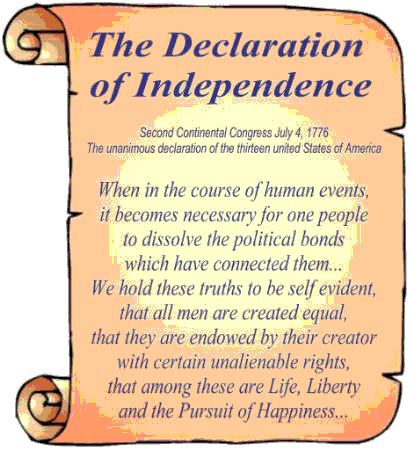 In particular, the Declaration is attacked for being hypocritical in its claim that “all men are created equal” because equality did not include women and slaves.

Here is at least a partial refutation of these attacks.

We must understand that the Declaration is the “Unanimous Declaration” of the Thirteen States, and therefore certain matters were intentionally not addressed in order to maintain a solid front against King George III and Parliament.  The members of the Continental Congress (unlike the modern US Congress) were representing their States and NOT their own political views.  Yet they still were able to proclaim liberty through all the land. They also recognized that they were looking to, and expressing, an ideal. The States that they represented were not perfect, and neither were they: they were imperfect sinners and failed to live up to the ideals they now proclaimed. But at the same time, they made it clear that the tyranny of the Crown and Parliament far exceeded that of their own States and people.

These things are very hard for many in the 21st Century to understand, with the intense emphasis on political correctness.

But let us further refute the claims of hypocrisy.

This Unanimous Declaration of Independence was drafted, and largely ended up with the words of the Committee of Five appointed by Congress to do so. This committee included Thomas Jefferson, Benjamin Franklin, John Adams, Robert Livingston, and Roger Sherman.[i] 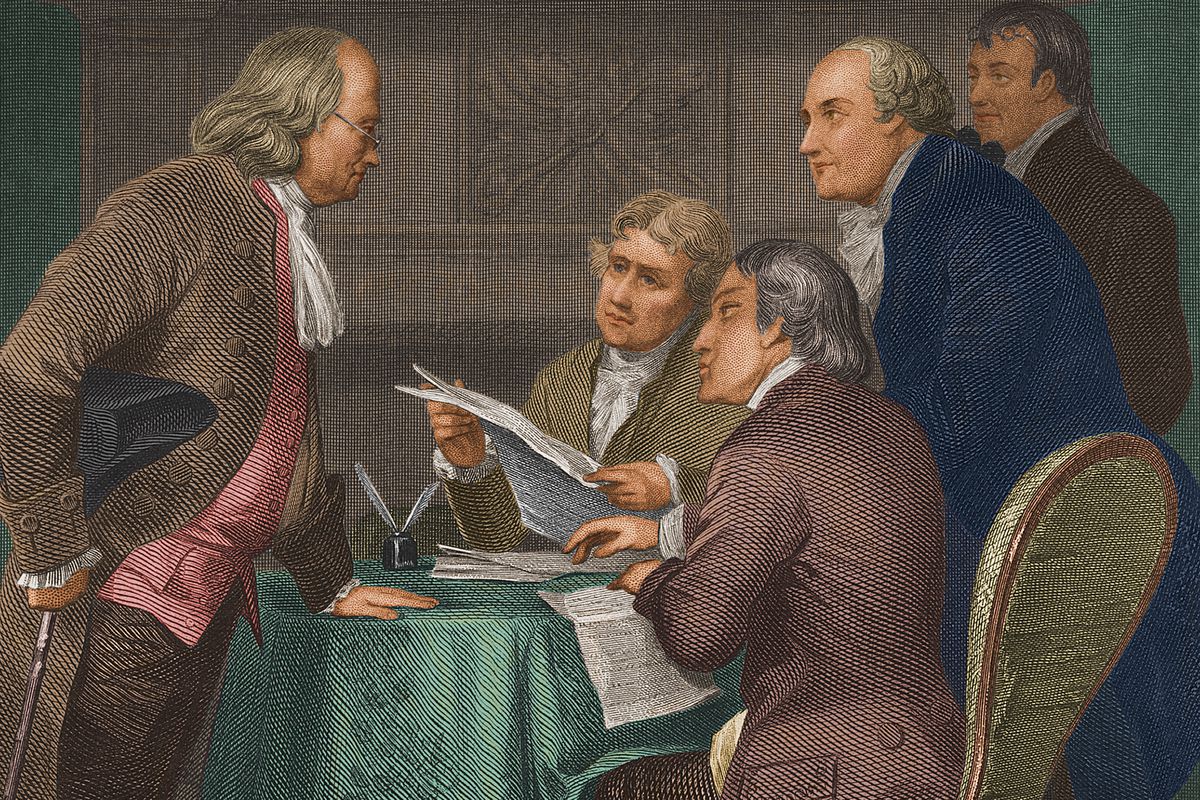 Benjamin Franklin of Philadelphia is reported to have owned two slaves, yet he established the Pennsylvania Abolition Society in 1775. That society was the first to submit a petition to the very first Congress to abolish slavery. He rejected slavery and wrote against it as early as 1750 and certainly by 1763.

Thomas Jefferson of Charlottesville did own many slaves, as many as 600 according to some reports.  Yet he co-sponsored a bill in 1769 (seven years before the Declaration of Independence) to abolish slavery in Virginia. He wrote the first draft of the law that banned slavery in the Midwest (the “Old Northwest Territory”). He asked Congress for and signed the law that abolished the American international slave trade, wrote the most influential antislavery book in American history, and drafted a bill that would have banned slavery from most of what we call the Deep South today (before the states of Alabama, Mississippi were admitted, and before the Louisiana Territory was purchased). (It failed by one vote in Congress.)

John Adams of Boston, was the chief writer of the Massachusetts State Constitution of 1780, which prohibited slavery in the state. He did not ever own slaves. He considered slaves were humans and fully entitled to the rights ordained by God for all men. He and his brother Sam were loud in their opposition to slavery.

Roger Sherman of Connecticut did not ever own slaves. And he drafted the Connecticut law that abolished slavery in Connecticut.

Robert Livingston of New York later actually refused to sign the Declaration, stating it was too soon to declare independence. Some have speculated it was because it did not call for an end to slavery. He was both a governor of New York and Chancellor (today called the Chief Justice of the State Supreme Court) and close friends and political allies with many people involved in anti-slavery efforts (including his own relatives). One of those was John Jay, who as governor signed the New York law that abolished slavery in 1791.

These men almost certainly DID include slaves – of whatever race – in “all men are created equal.”

But what about women? Jefferson’s Bill for the More General Diffusion of Knowledge (which he drafted for Virginia, though it was not adopted) provided for education of Virginia “children.” On its face, that included girls. (Perhaps interestingly, he also said “children” included blacks — and elsewhere said it could be read to include slaves.) One of the most important of the Founding Mothers of our American Union was Abigail Adams, wife of John Adams. She clearly influenced her husband in her extensive correspondence with him, and we can be certain that “men” was intended to include those of both sexes. (It is also important to remember that “man” and “mankind” referred to all humans, before 20th and 21st Century political correctness.) That it was understood in this way well before even the 20th Century can be seen in the actions of the Founders of (among others) the Territory of Wyoming in 1867, by explicitly stating that women have equal rights including those of voting and holding office.

Given the world in which the writers and the members of the Continental Congress were raised, how can we look back with such perfect hindsight to claim “they should have had their ideas sooner.” No doubt, had the people claiming their supposed moral superiority to the Founding Fathers been around then, they would have rejected a thousand years of society and tradition immediately.  Just as they do 250 years of tradition and history today. (Warning: sarcasm here.)

I suspect that the motives of the social justice warriors and their fellow Tranzis (transnational “progressives” and socialists who are actually incredibly regressive) are to discredit everything that is found in the Declaration and the Constitution, and the principles upon which those are founded.


[i] Much of this information was taken from Kevin Gutzman, a faculty member of Tom Woods’ Liberty Classroom, a historian and biographer of various of the Founding Fathers. I’ve added my own research online and hardcopy, including some original documents.

1 Response to A look back at the Declaration of Independence